With the rise of Olympus DAO, a new form of Bonds and Protocol Controlled Value can be created to achieve all 4 goals listed above, named Dynamic Bonds.

Before getting into Dynamic Bonds, a quick overview of Olympus DAO:
Olympus has shown that it’s more efficient and sustainable to sell native token Bonds at a discount to build protocol-owned liquidity. Until now, projects were mostly giving tokens away ‘for free’ via liquidity mining. The issue with liquidity mining was described by Andre Cronje as the ‘something for nothing’ problem.

The dHEDGE core team explored various options and found that it could improve on the Olympus bonds model with Dynamic Bonds.

Dynamic Bonds take the Olympus Bonds model and improve it in the following ways:

Propose 25k DHT bond sales per week, to start with.

A Dynamic Bond Buyer can decide on the lock duration and DHT Bond discount as per the following proposal, the idea being to incentivize longer lockups:

Note that the bond lockups compete with DHT Staking Rewards, so the discounts need to be attractive in comparison to Staking to generate protocol-owned liquidity.

Bond sales will generate revenue for dHEDGE and will go into a DHT-dUSD Balancer pool. This will:

Note that Dynamic Bonds can run in conjunction with Olympus Pro, which is also in discussion.

Create a new Dynamic Bonds contract with functions to: 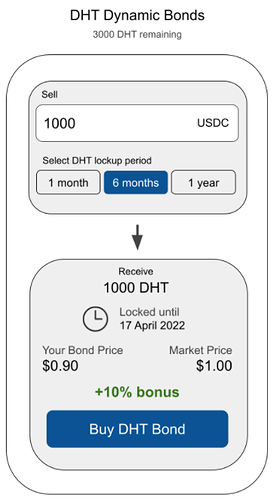 Buyers can decide on the lockup time period that suits them from 1 week to 1 year (dynamic time duration). Buyers are incentivised to lock up longer.

I would like the option for an auto lockup renewal so I am not forced to revisit the app and set a “new” lockup period. That benefits also the project for investors that forget to revisit the app. When someone plans to stop the lockup he disables the renewal option so it ends up the lockup when the time comes…

I approve .
Great idea to lock up and incentivize.
Which give us liquidity now to utilize for dht later . I agree to this.

My only suggestion would be to offer more than usdc initially (maybe dai )
Maybe eth later?
Maybe Matic for polygon if able?

Will this contract be available on all chains that support the dht token ?

I might be misunderstanding your comment, but you can buy multiple bonds at multiple time periods, so there would be no need for renewal.

Good idea, can be expanded to support more than usdc. Thinking Polygon to start with as it would be easiest to provide dUSD liquidity

Increased longer time period discounts by 5% to better compete with staking, incentivize longer lockup and kick off to a strong start. Can re-assess after the first 25k DHT.