The Status Quo of Staking DHT

The current dHEDGE staking system rewards DHT holders that choose to lock up their DHT in return for vDHT.

These stakers then benefit in four ways:

Currently, DHT is emitted to stakers through one of two methods:

The main purpose of DHT is to provide a boost to positive investing behaviour.

Via staking DHT together with dHEDGE pool tokens, a staker is able to amplify the returns they’re achieving through investment activity.

The amplification is achieved by a combination of three factors:

As dHEDGE protocol revenue is a direct function of pool fees, the design of this staking mechanism is directly aligned to reward successful investing behaviour.

The effect of these changes will:

This proposal will move staking DHT away from Ethereum L1 to both Polygon and Optimism.

Note: A new dHEDGE pool that will only hold DHT as an asset will be created. This can be paired with vDHT so a staker only has exposure to DHT.

Nancy stakes $200 of the Conservative Fund pool tokens and pairs this with her vDHT.

After 3 months of being staked, Nancy has accrued 250 vDHT, and the performance of Conservative fund has increased 20%. From the Duration and Performance bonus charts,

If Nancy unstaked her DHPT her position would look like:

Should Nancy choose to not claim, and instead hold her staked Pool tokens and re-evaluate 3 months later, she would be also making a decision based on a forecast performance of the Conservative fund.

Let’s say 3 months later the Conservative fund is now at 30% pool performance increase from when Nancy initially staked, her staking bonuses would be:

If Nancy unstaked her DHPT her position would look like:

In the above example if the Conservative fund had increased 50% instead of 30%, Nancy would get the maximum performance bonus of 1.0.
Her staking bonuses would be:

Geoff only wants exposure to DHT. In this case he will invest in the DHT only dHEDGE pool.

Initially he stakes 1000 DHT and commences accruing vDHT. Geoff invests and stakes his $200 of the DHT only pool tokens.

After 3 months the price of DHT is $0.18 his potential staking bonuses would be:

Should Geoff choose to not claim, and re-evaluate 3 months later. The price of DHT is now $0.24
His staking bonuses would be:

See chart below for potential returns on DHT only pair: 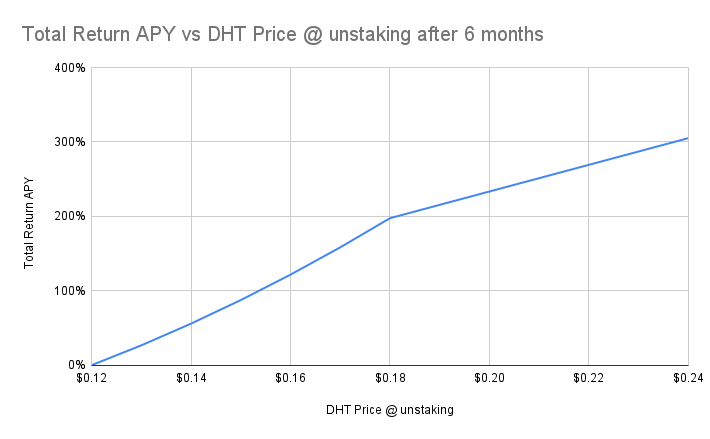 Note: Each staked position, (vDHT,DHPT) is treated separately. To increase a stake a new position will need to be opened.

The current DHT staking will be depreciated along with performance mining. The locked tokens will be claimable.
DHT Staking 2.0 will replace this.

Initially Staking 2.0 will only include 10 whitelisted dHEDGE pools.

The amount of rewards a staked (vDHT, DHPT) position receives varies with two factors: the amount of time the pair has been staked for (Duration Bonus), and the investing return that pool has returned since being staked (Performance Bonus)

Staking DHT provides the staker with an incrementing amount of vDHT tokens over time. vDHT accrues linearly over a 12 month period until a maximum amount of vDHT is accrued, at a total of 1:1 to DHT initially staked. 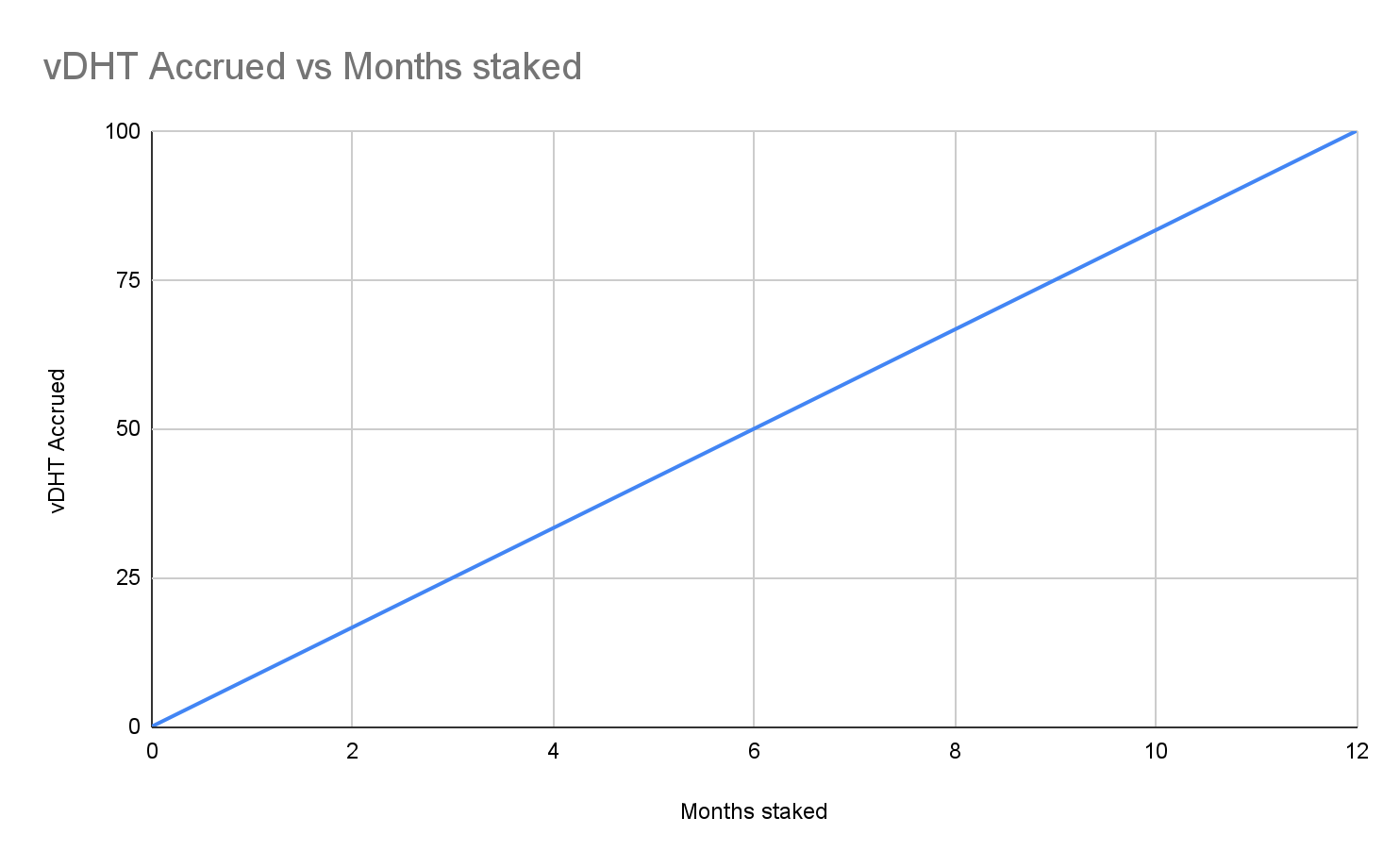 The primary utility of vDHT is for voting as part of dHEDGE governance. It also factors into staking rewards, as it is then required to be paired with a staked dHEDGE Pool token to commence accruing rewards.

DHT Staking rewards are derived from a combination of both vDHT and staked dHEDGE Pool Tokens(DHPT).

Staking rewards therefore are a direct product of:

The Staking Ratio is a linear scale from 0 to 1 which is the ratio of:

To optimise staking returns, a staker must supply a minimum of 6x vDHT to the initial dollar value of the staked pool tokens. In the above equation, S needs to be greater than or equal to 6 for max rewards.

In the case where this ratio decreases, accrued rewards will be reduced by the same ratio.

Once invested in one or more dHEDGE pools, the associated pool tokens (DHPT) can be then staked on the platform to qualify for DHT staking rewards.

Once some DHPT is staked, a duration counter commences. As this period increases, so does the Duration Bonus, growing according to a linear relationship below.

The duration bonus rapidly increases linearly, to a max at the 6 month mark. 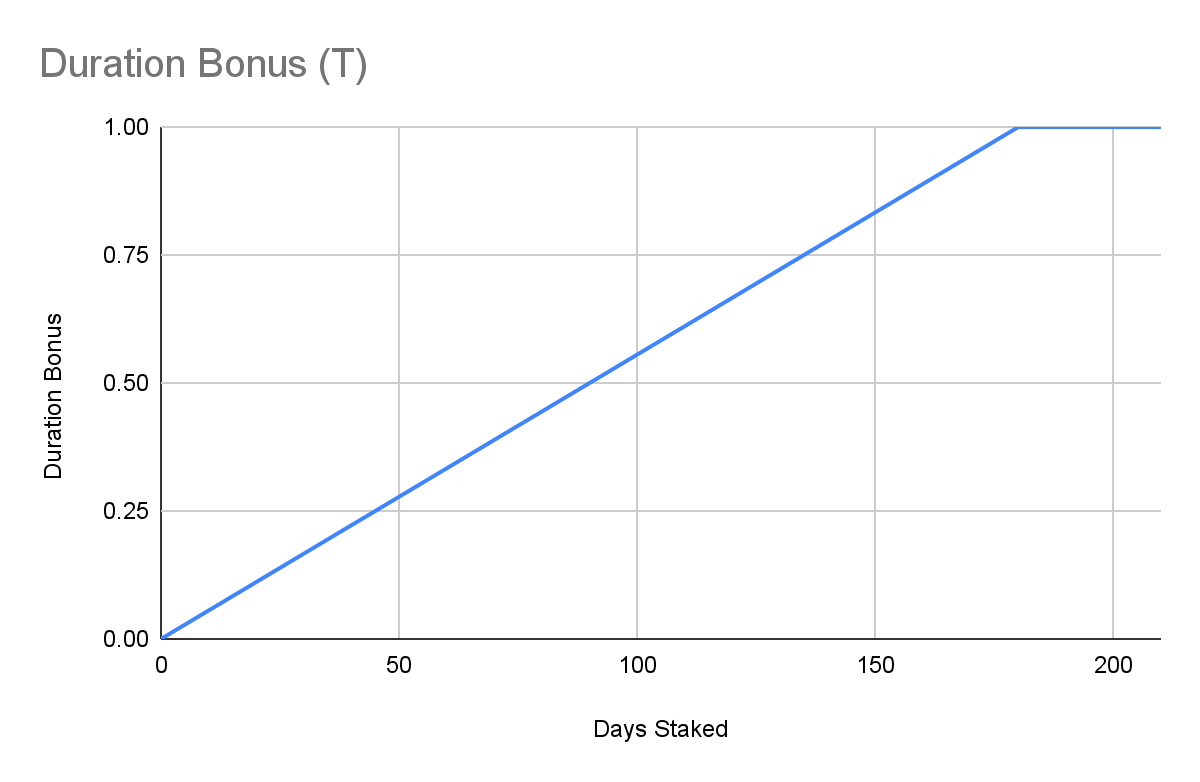 In addition to being rewarded for extended periods of staking, DHT rewards are also boosted in relation to dHEDGE Pool performance.

By being invested in pools generating positive investment performance, DHT staking rewards are boosted to the staker along the Performance Bonus line below. 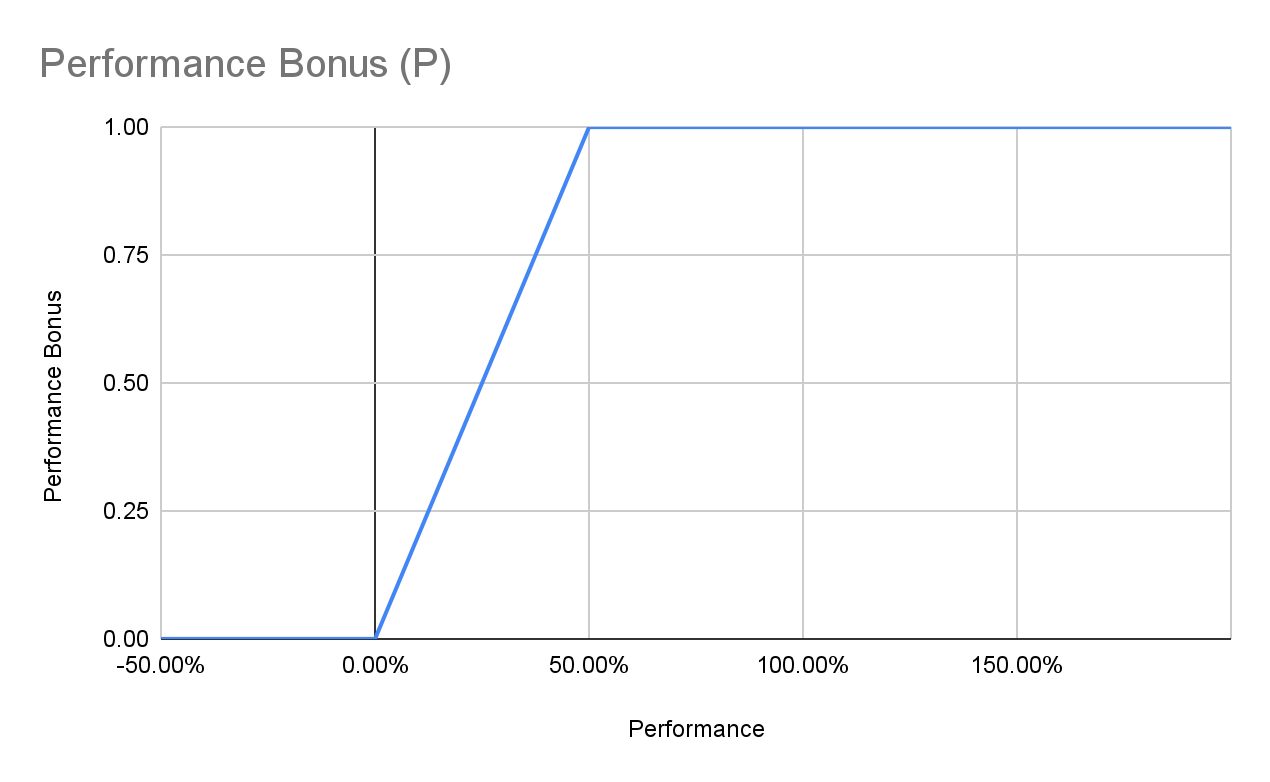 Note: the Performance Bonus is a dynamic index which dictates staking returns at the point of claiming, and is not a cumulative function typical of other traditional DeFi staking programs.

Will be put up for vote in 2 weeks time.