Since the launch of mainnet on October 26, 2020, the dHEDGE ecosystem has continued to grow from strength to strength. With over $280m volume traded and 26m total value locked, it is safe to say that the community has successfully built a non-custodial platform that has enabled investors to invest and trade like the best managers in the industry, without losing custody of their assets.

With that said, the primary purpose of building dHEDGE since its inception was to create an unstoppable protocol that democratises investing and tears down the barriers for investors and managers alike. In order to achieve this, further steps toward decentralization must become a paramount focus to enable the protocol to become truly antifragile.

With this in mind, several community members have signalled their interest in transitioning dHEDGE into Phase 1 of the EcoDAO in an effort to remove central points of control and further decentralize the protocol. Our team is proactive in decentralisation movements and we are open to decentralise dHedge governance and put the decision making into the hands of community members.

This proposal will ultimately outline what the initial steps for the transition will be, and why they will benefit the protocol and the ecosystem. 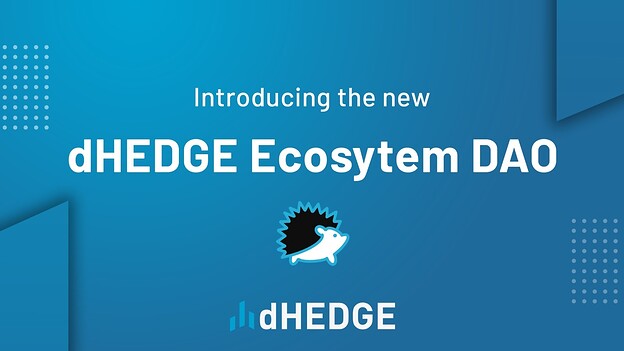 In an effort to decentralize governance, we are proposing to move decision making functions away from the core team and into the hands of the community. This will be achieved by electing a council of 5-10 community members that have emerged organically from the community and have demonstrated a shared vision and eagerness to grow the dHEDGE ecosystem.

We propose that this structure will strike a balance between sufficiently decentralized governance, while not being too decentralized as to compromise the speed and efficacy of the development and decision making relating to dHEDGE.

These elected committee members will ultimately be key holders who serves as the dHEDGE EcoDAO governance body with defined responsibilities, which include:

It is pertinent to also note that the committee will be open for nomination continuously and changes to appointment will be approved / rejected by the council on a monthly basis.

The proposed initial dHEDGE council members were formed by a selection of key contributors and members of the dHEDGE Ecosystem. They are as follows:

We are submitting a proposal to request funding from dHEDGE DAO to kick off the dHEDGE EcoDAO with the following schedules.

This is a fantastic initiative and will be a big step in further decentralising dHEDGE. Let’s put it up for a vote!

Have you ever thought exercising governance via https://app.boardroom.info/
Many well known projects do that already ! Even SNX !

Thanks for the suggestion Lion - will check it out.

The following transfers have been made from the DAO: